Pretty Mike and the Leash: A miniature Reflection of the Nigerian State 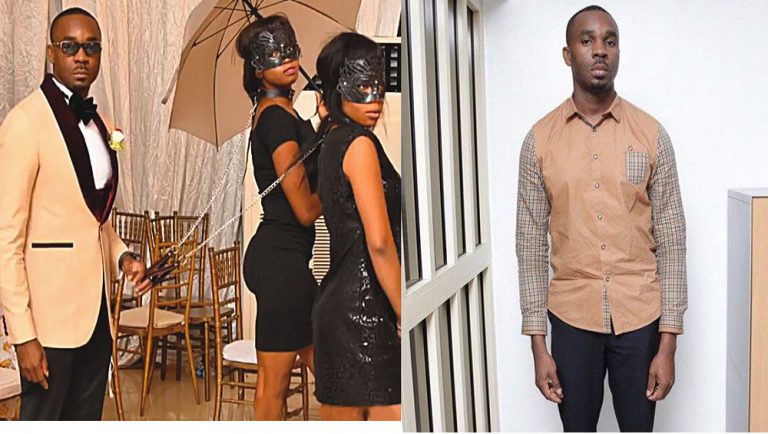 So the story of socialist and club owner, Eze Nwalie Nwogu popularly known as Pretty Mike trended
a while ago on how he chained some girls on a dog leash and took them to some events in Lagos.

This action prompted the Lagos State Government to issue an arrest and made him sign an undertaking that he will never do such debasing act again. As clear as government position seems, the arrest generated controversies as many consider the arrest as unwarranted since the ladies involved consented to it.

The argument about the legality of the arrest has opened up a hole on the  state of human right in Nigeria which has become worrisome to me; if people can justify wearing a collar on another person (even with consent), then they can consider slavery (when payment is involved) as dignified.

Human right abuse has a long history in Nigeria and can be linked to elements of culture and our political transition as a country. Slavery for instance has had a long root in African system and far predates colonization (though that is also practised across the world prior to modernization) as  many Africans will sell their children as slaves to redeem a debt, those children were denied the Freedom from Slavery.

Another pervasive element of culture is the practice of Female Genital Mutilation (FGM) also called female circumcision which is still practiced in many climes today. The practice involve the partial or total removal of the female genitals for non-medical reasons. They subject the girl child to such act of injustice based on their assertion that the external genitals make them promiscuous. They are denied the Freedom from Torture and Degrading Treatment. The World Health Organization estimates that more than 3 million girls in Africa alone are at risk of undergoing this practice every year.

At childhood, this inequality continues, in many societies the girl child is denied quality education while the male counterparts are sent to school. They are denied Right to Equality. Some climes even gives them out as young brides – giving out a 11 years old for marriage- They are denied their Right to Marriage and Family. Many children are also engaged in productive activities such as working on farms, street hawking, bus conductors, scavengers or baggers – these falls within the category of child labour and are denied of their Right to Education and make them vulnerable to various forms of risk.

In the society, they cannot challenge an elder or tradition even when they are right. They are denied of their Freedom of Opinion and Information. In the higher institution, the management expects them to be docile to some structural nuances in administrative issue. Instead of engagement, they suddenly make decisions and when students protest under their students union, they are clamped down while some members are victimized.

They are denied Right of Peaceful Assembly and Association. They eventually graduates and struggles to find a job. They form a union and protest non-payment of salaries or other labour benefits, then they are supressed and denied the Right to Desirable Work and to join Trade Unions. After work they come back home to rest, then they took off the electricity and the neighbour next door have started his generator, then it is difficult to sleep. They are denied the Right to Rest and Leisure. They try to improve their condition, get a decent house, put children in good schools and enjoy basic resources of life but then fuel prices increases, hyper-inflation, pay cut at work, family budget has to shrink. They are denied Right to Adequate Living standard. In some clime, a woman struggles with the husband to build a fortune and suddenly the man dies – She can inherit property
because women do not in those places. They are denied Right to Own Property.

It goes on and later they get old and become an older citizen, but there are no special treatment for the aged, some still have to work to support themselves. – They are denied Right to Social Security. Recently in Lagos, it
was even reported of the indiscriminate dumping of dead bodies in a local cemetery. I guess they are
denied their right of resting in peace. The list can go on but across segments of the society are nuances of human right violation exhibited in every form. Unfortunately the long years of military dictatorship have further exacerbated the narrative producing a set of docile citizens who can be easily manoeuvred by the ruling class.